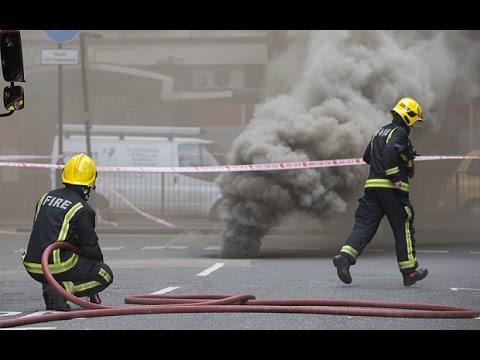 An electrical fire under the pavement in central London has led to some 2,000 people being evacuated from nearby buildings and a number of West End shows being cancelled.
Fire crews were called after smoke was seen coming out of an inspection cover on Kingsway, in Holborn, at 12.30 BST.
The electrical fire is among cables, said London Fire Brigade (LFB). A 25m safety cordon has been put in place.
Police have declared a major incident and closed the road at both ends.
Shows at the Lyceum, Duchess and Aldwych theatres have been cancelled, London Theatre Direct said.
And judges, lawyers and staff at The Royal Courts of Justice in The Strand have had to evacuate.
People have evacuated buildings along Rose Street and Garrick Street, along with the market building in Covent Garden.
Emergency services are waiting for utility companies to disconnect the power supply before tackling the fire. Seventy firefighters were at the scene, LFB tweeted.
Motorists have been told to avoid the area.
Gary Squires from London Fire Brigade at the scene of the fire.
He said the fire started in a large service duct, now “heavily smoke-logged”, which carries electric cables, gas cables, water pipes and a number of hazards beneath the street.
“We have some very high-powered cables down there which is causing a hazard to our crews,” he added.
Mr Squires said: “We can see flames coming out of the pavement which looks quite dramatic, but that is the gas pipe – it has now ruptured and that has now ignited and the gas is burning off and that, if anything, makes it safer for us as the gas is being burnt off.”