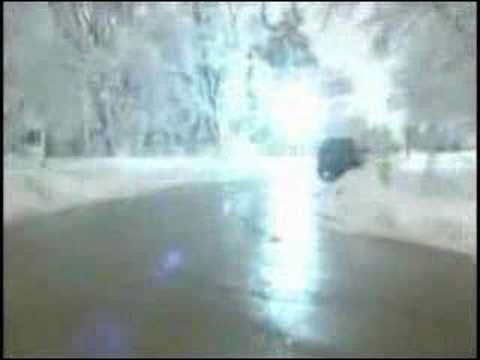 *UPDATE*
In the comment section, member “tomh1138” claims to have been witness to this. His comments are found below.

An ice-covered tree limb falling onto a power line. Captured live by WHO TV Channel 13 out of Des Moines, Iowa, on February 25, 2007. The limb fell directly onto the line, causing a series of explosions of the transformers of the grid.

tomh1138’s comments —–
This happened in Urbandale, IA. I’m a member of the Urbandale Fire Dept. and was at this scene (just slightly out of camera view) to the right where our fire engine was parked. The guy running and diving in the background was also on the engine with me. We initially were called out on a report of a tree on fire.
When we first arrived on scene, we had parked almost directly under where the power lines were. Our dispatch information did not mention anything about problems with the power lines. Once we saw how close the branch was to the power lines, we moved back to a safe distance. About 5 minutes later, the branch fell and then you see what happens in the video.
It was pure luck that the camera crew was there at the time they were. The “explosion” was pretty intense. You could feel the vibration from it in the ground over 50 ft. away.