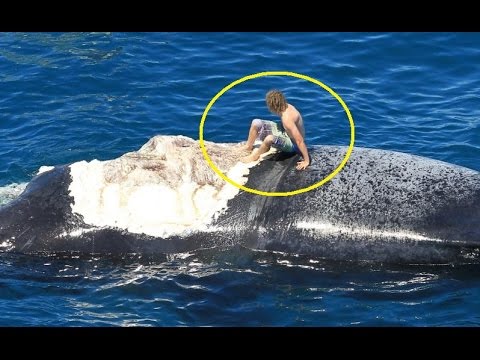 Harrison Williams, of Quinns Rock, north of Perth, said: “I was out on the boat with the boys and one of my mates said it would be pretty funny to surf the whale so I did it.”

The 26-year-old said he saw the sharks, including a massive great white, but they did not deter him from getting into the water.

“They were too busy chomping on the whale so it wasn’t too bad,” he said.

Mr Williams told Seven News it was not until he was on top of the whale that he realised the danger and stupidity of his actions.

“Definitely not (wouldn’t do it again) … I’ve done it, I don’t need to do it again. Definitely it was a stupid act, didn’t mean to disrespect anyone, mum thinks I’m an idiot, dad’s not too proud either,” he said.

Authorities reportedly won’t fine Mr Williams because the whale was already dead and he did not remove any part of it.