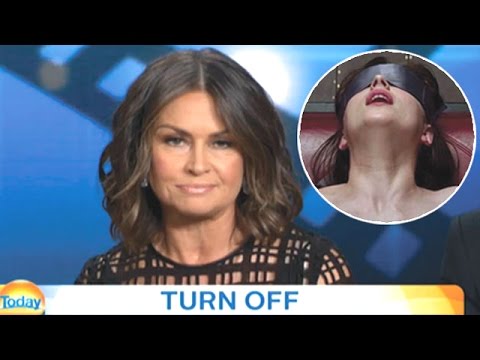 Lisa Wilkinson called the new eroctic film 50 Shades of Grey ‘the worst movie she has ever seen’ .

It’s the worst movie: Lisa Wilkinson describes Fifty Shades Of Grey as domestic violence dressed up as erotica’ and says her husband ‘didn’t get lucky’ after watching it

It’s the most anticipated film of the year, set to give romantics some sizzling inspiration just in time for Valentine’s Day.

After seeing the film on Wednesday night, the 55-year-old Australian star described it as ‘more appalling than appealing’.

‘I’ve got something I want to get off my chest,’ she told viewers.

After explaining her husband Peter was very excited she was off to see the raunchy flick, Lisa didn’t hesitate to point out the storyline’s flaws.

‘This was the book series after all that left women all over the world wanting more if you know what I mean,’ she began, referring to the famous novels penned by British author E.L. James.

‘Sure I was the only woman I know who hadn’t read the books but hey 100 million copies sold must make a good movie. Right? Wrong!’ she sternly declared.

Not hesitating to speak her mind, she continued: ‘Fifty Shades Of Grey is quite simply the worst movie I’ve ever seen’.

It wasn’t just the storyline which Lisa frowned upon, but also the onscreen performance of lead stars Jamie Dornan and Dakota Johnson.

‘Jamie Dornan as Christian Grey is the thirty-something jerk of a billionaire who never seems to work,’ she said, adding he is ‘an emotionally crippled narcissist no one could love’.

‘Meanwhile Dakota Johnson is the one dimensional lip-biting (could someone get that girl a chapstick) pathetic Anastasia Steele who for no discernible reason falls in love with the aforementioned jerk and single handedly sells women across the world short,’ she continued.

Giving the film one star out of five simply for the reason she enjoyed devouring a choc top during the cinematic viewing experience, Lisa also added her husband did not get any action in the bedroom when she got home after the movie.

‘No he didn’t get lucky last night because after two hours of complete drivel, I need more than a choc top to pop my corn,’ she candidly admitted.

After a fiery movie review, Lisa asked fellow Today Show presenter Richard Wilkins for his evaluation of the flick, with the entertainment reporter giving it two stars for the soundtrack and art direction.

Several local media personalities attended the Sydney premiere of the film on Wednesday night, taking to social media following the screening to share their thoughts.

Fifty Shades Of Grey opens in Australian cinemas on Thursday May 12.